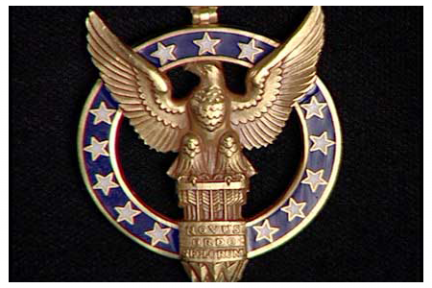 Read more about the Medal for Merit’s history

Office of the Chief of Naval Operations

From: Chief of Naval Operations.

To: Secretary of the Navy (Board of Decorations and Awards).

Encl: (A) Proposed letter of Commendation.

1. At the beginning of the war the technical problems facing the Communications Intelligence Organization assumed a complexity requiring the application of the most advanced basic knowledge in the field of electronic counting and associated acts. In fact, the solution of some of these problems required significant advances in basic knowledge as well as immediate application of such advances.

2. After a survey of available technical talent, the Navy selected Mr. Joseph R. Desch of the National Cash Register Company, Dayton, Ohio, as the most promising scientist in the field. A Naval facility (the U.S. Naval Computing Machine Laboratory) was set up at the National Cash Register Company to provide a means whereby the skill of Mr. Desch could effectively be brought to bear on the special technical problems associated with Communications Intelligence. Throughout the war Mr. Desch served the U.S. Naval Computing Machine Laboratory as its research director.

3. The successes of the Communications Intelligence Organization in the effective prosecution of the war are a matter of record. Many of these successes rest upon technical achievements in basic research and development which were the direct result of the brilliant originality, superb skill, and immeasurable perseverance of Mr. Joseph R. Desch.

4. The work of Mr. Desch was of vital importance to the solution of problems and the design of equipment which were absolutely necessary to the success of many operations. His exceptional brilliance in the design of a particular type of analytical equipment was largely responsible for the successful operation of this equipment which played a major role in the battle of the Atlantic, the Mediterranean campaigns and the Normandy landing. In addition to carrying out the design of equipment which was based on tolerances of almost unachievable exactness, Mr. Desch was forced to design and develop special vacuum tubes and to carry out investigations in the chemical compositon of electrical components as well as to develop special plastic materials in which to imbed these components. The complexity of this equipment is indicated by the fact that one unit contained several thousand tubes and relays and over a million soldered connections. There is no case on record in which such advanced techniques were incorporated into equipment of such complexity under such pressure. The succesful operation of this equipment for 24 hours a day, 7 days a week during the critical period of the battle of the Atlantic is witness to the consummate sklll of Mr. Desch.

5. During the European campaign technical advances made by the enemy required sitll further requipment development. He designed and built equiprment for this emergency also which was highly successful and played an important role in the battle for Germany. In numerous instances, in spite of independent attacks on these technical problems, by the British and other American engineers, the only effective solution was that obtained by Mr. Desch.

6. Because of his outstanding services in the furtherance of the war effort of the United States and his exceptionally meritorious conduct in the performance of them, it is recommended that the Medal for Merit be awarded to Joseph R. Desch

(Admiral Ramsey had a distinguished military record–read about him here)

Lost? You are here….

Home > The Story In Depth > Presidential Medal for Merit

Our class description is here!

The great force of history comes from the fact that we carry it within us, are unconsciously controlled by it in many ways, and history is literally present in all that we do.

In the summer of 2015 I was contacted by an author interested in the stories of the Sugar Camp WAVES–one of my favorite topics. Now their story as well as that of the WACS at Arlington Hall is available and wonderfully successful.

“Code Girls is an extraordinary book by an extraordinary author. Liza Mundy’s portraits of World War II codebreakers are so skillfully and vividly drawn that I felt as if I were right there with them—mastering ciphers, outwitting the Japanese army, sinking ships, breaking hearts, and even accidentally insulting Eleanor Roosevelt. I am an evangelist for this book: You must read it.”
author of The Good Girls Revolt – Lynn Povich